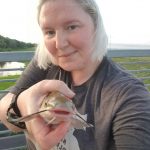 I grew up in Indiana and graduated from Indiana State University in 2015 with a B.S. in Biology and a minor in Environmental Science: Sustainability.  During my undergrad I focused on sustainability research and ethical farming.  In my junior year I fell in love with freshwater biology.  I received her Master Naturalist Certification from the University of Illinois Extension in 2017, while volunteering with the Illinois Natural History Survey Mollusk collection, and the Center for Bat Research, Outreach, and Conservation. Kara also volunteers with the Upper Sangamon River Conservancy. In 2019 I started working at the Illinois River Biological Station, assisting with field surveys and in the lab with zooplankton identification.  In 2020, I was able to take on more responsibility by working with Whooshh Innovations to study implementation and effectiveness of a novel fish ladder design between the Illinois River and The Nature Conservancy’s Emiquon Preserve.  The research focuses on using the steeppass fish ladder as a new method of removing invasive carps and allow native fish passage around manmade structures.  My thesis focuses on the effectiveness of the fish ladder and the contribution of Emiquon to the river’s zooplankton community.
karaep2@illinois.edu 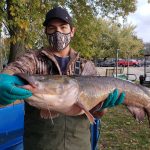 Originating from Owensboro, Kentucky, I have spent most of my life in Western Kentucky. I Graduated from Murray State University with a B.S. in fisheries as of May 2019. During my time at Murray State, I researched larval fish phenology within Kentucky Lake. My passion for freshwater ecology brought me to the Illinois River Biological Station as an aquatic technician after graduation. My graduate research involves radio telemetry of Flathead Catfish within the Rock River near Dixon, Illinois. My goal is to understand the nesting behavior of these fish and their potential use of artificial nesting structures placed by the IDNR. I enjoy angling, especially as a proponent for non-classical sportfish, such as rough fish and micro-fish!
spencerp@illinois.edu 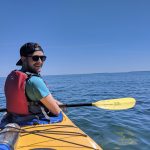 I am originally from Milford, Michigan, but I have lived in Chicago since 2014. I completed my B.S. in Conservation and Restoration Ecology at Loyola University Chicago in 2018. During my time as an undergraduate, I worked on two major research projects. First, I spent a little over a year working to collect and identify invertebrate and plant samples in order to map the presence of various invasive species throughout Chicago’s waterway system. Secondly, I completed a spatial science fellowship with the National Oceanic Atmospheric Administration in 2017, where I created an analytic protocol to select sustainable sites for new aquaculture developments in California. As of summer 2020, I am now working on an M.S. assistantship under Dr. Lamer where I will be collecting and processing invertebrate samples to trace the historic dispersal of an invasive amphipod across the Illinois River. I love using R and GIS software to look at large-scale variations in both biotic and abiotic variables, and I am excited to have an excuse to do so again! Outside of research, I enjoy cooking, playing board or video games with friends, and I am also a DIY musician and audio engineer.
trenth@illinois.edu 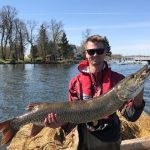 I am from Walker, Minnesota and graduated from Bemidji State University in the spring of 2020 with a B.S. in Aquatic Biology with an emphasis in fisheries and a minor in Geographic Information Systems. During my time at Bemidji State I was an active member of my AFS subunit and was the secretary in 2019-2020 school year. At Bemidji State, I had the opportunity to work as a telemetry technician and help study the movement of Burbot in a Northern Minnesota lake. For my senior project, I used bioenergetics to assess if stocking Northern Pike and Yellow Perch into turbid shallow lakes could create a tropic cascade and return the lakes back into their clear-water state. In the summer of 2019, I had the opportunity to work for the Minnesota DNR-Fisheries as an intern. As an intern, I helped perform standard lake surveys using gillnets and trap nets, a muskie population survey, electrofish for bass, crappies, and sturgeon, and stocked walleye fry into some of Minnesota’s lakes. My research under Dr. Lamer will focus on Bigmouth Buffalo movement through acoustic telemetry on the Mississippi River. In my free time I enjoy training my dog, hunting, fishing, and spending time outside.
bdsea2@illinois.edu 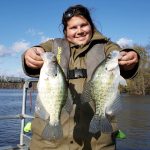 I am from Mineral, Illinois. I graduated from Southern Illinois University in Carbondale in Spring 2015 with my B.S. in Zoology with a specialization in wildlife biology and conservation, and a minor in environmental Science. I started as a technician at the Illinois River Biological Station in 2017 where I found my passion for fisheries. In July of 2019, I was promoted to the Emiquon Project Coordinator and shortly after became a member of Dr. Lamer’s Lab. I will be pursuing a M.S. in Environmental Sciences at the University of Illinois in Springfield, starting classes in Fall 2020. My research focuses on better understanding the influence of abiotic and biotic predictors on year class strength and yearly growth using otoliths from Bluegill, Largemouth Bass, and Black Crappie at the Emiquon Preserve.
aeb4@illinois.edu 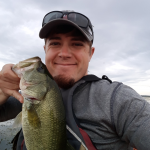 I call Oklahoma City home, first attending Oklahoma State University to pursue a Civil Engineering degree before transferring to Principia College where I got a Bachelor of Science in Biology (Winter 2016).  In my undergrad I focused on wetland restoration and completed an undergraduate thesis that I published (Assessment of a Restored Wetland in West-Central Illinois) looking at soil, vegetation, and herpetofauna of a recently restored wetland.  During my senior year I reconnected with my love of fishing and decided to pursue a job in fisheries, landing at the Illinois River Biological Station (IRBS) as a technician in 2017.  The work on the Illinois and Mississippi rivers intrigued me, but I moved back to Oklahoma in Dec ember 2018 to work as a stream technician working on small rivers and streams.  I was lucky enough to return to IRBS in the fall and had the opportunity to attend graduate school at the University of Illinois looking at the effects of the closure of  several lock and dam structures on the Illinois River for repairs in 2020.  I enjoy the outdoors, addicted to fishing (primarily bass), and playing videogames when the weather isn’t nice enough to be outside.
tbookout@illinois.edu 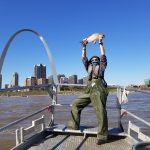 I am originally from Colorado Springs, Colorado. I grew up in a military family and have lived in many places. My honors biology class in high school sparked my passion for the environment and I knew I wanted to pursue a career in biological sciences. I attended Southern Illinois University of Edwardsville and graduated with my B.S. in Biology in 2013. My first job within the field of natural resources was as a field technician at the Illinois Natural History Survey’s Illinois River Biological Station in Havana, IL where I had briefly met Dr. Lamer for the first time. I then spent several years in the environmental consulting business before I realized I wanted to return to research in aquatic ecology and to pursue a master’s degree. From February 2018 to October 2018 I worked as a field technician for the INHS Great Rivers Field Station in Alton, IL where Dr. Lamer and I met again on a field trip to the Kibbe Life Science Station and subsequently applied for a position in his lab. I am currently in the middle of my second semester of graduate school at Western Illinois University. My project and thesis involves a gear evaluation and aquatic macroinvertebrate survey of the upper Mississippi river.  I also have a passion for public outreach and communication. I am the public relations/outreach coordinator for the WIU subunit of the American Fisheries Society. In my free time I love hiking and playing roller derby!
cr-miles@wiu.edu 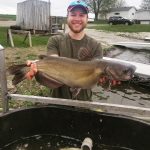 I am from Lincoln, Nebraska and graduated with a B.S. from the University of Nebraska-Lincoln in December 2017 with a major of Fisheries and Wildlife. During my tenure at the University of Nebraska-Lincoln I held a Temporary Lab Technician position with the Nebraska Department of Environmental Quality. At this position I was responsible for various water sampling in lakes, rivers, and streams across Nebraska. We also conducted fish and macro-invertebrate surveys by sampling those same rivers and streams to assess their condition. My research through Western Illinois University under Dr. Lamer will focus on the use of acoustic telemetry to identify movement and habitat preferences of Asian carp in the Upper Illinois River waterway. Growing up I have always enjoyed hunting and fishing with friends and family and that is what has encouraged me to pursue a degree and employment in this field.
jr-lebsock@wiu.edu 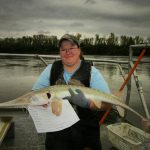 I am originally from Rochester, Missouri and I graduated from Missouri Western State University with a B.S. in Wildlife Conservation and Management in 2014. While pursuing my undergraduate degree, I started working for the Missouri Department of Conservation on the Missouri River. I worked several projects such as: Pallid Sturgeon Assessment Project, assessed fish community in chutes, and a herpetological study of wetlands.  After that, I worked for the U.S Fish and Wildlife Service as a technician. At FWS I worked on Asian carp monitoring for the Ohio and Tennessee Rivers. My graduate research at WIU focuses on herpetofauna at the Emiquon and Merwin Preserves.
Co-advised with Dr. Andy Casper (Illinois Natural History Survey)
om-mendenhall@wiu.edu